These are the major awards and titles that Ivory Pal was awarded during his two year show career: 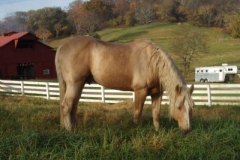 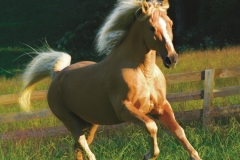 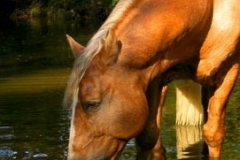 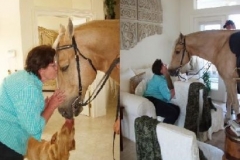 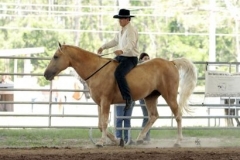 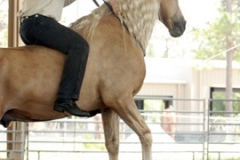 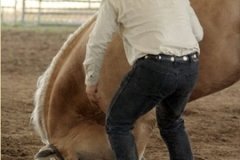 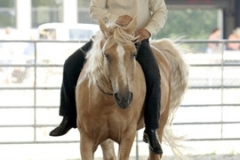 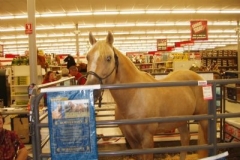 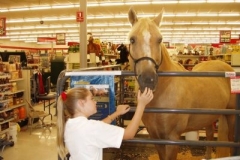 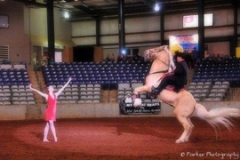 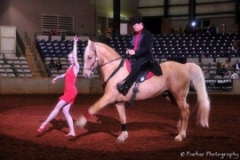 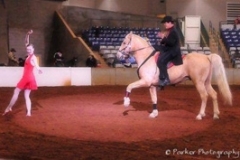 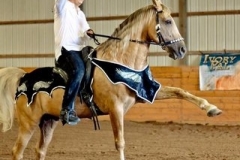 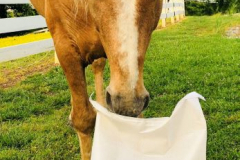 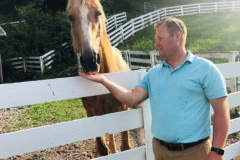 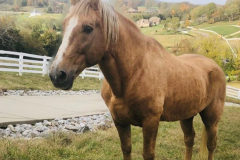 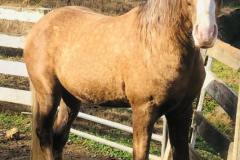 “At Home with Ivory Pal” by Helen Harvard

Ivory Pal. Just the name brings a warm glow of joy to my heart. My first encounter with Ivory Pal was by computer in my search for a Stallion to breed my mare. For 6 months I got to know Ivory Pal and his owner Rafael Valle through his website, phone, and email until I finally had the opportunity to meet both of them in person. Not only was I able to see Ivory Pal perform at an equestrian event where he “danced” to music, but was honored to be invited to spend a weekend with him at his home, Ivory Knoll Ranch, in Citra, Florida. Ivory Pal is far more than just a horse. He is charming, charismatic, gentle, friendly, intelligent, versatile and an absolute gentleman. Not only that, he is a Stallion. To quietly watch as he interacted with Rafael was a very special experience. These two have as close a connection as I have ever seen. Words were completely unnecessary between them. As Rafael brought Ivory Pal in from his paddock into the barn’s grooming area, I viewed their interplay with breathless anticipation as Rafael stroked Ivory Pal’s eyes and nose and was enchanted as Ivory Pal stood quietly and dozed off with his head in Rafael’s arms.

Ivory Pal and Rafael encapsulate every person’s dream of horse ownership. Although they are two distinct beings, these two appear as one. Mutual love, respect and trust is so very obvious. Watching them perform to their musical routines is akin to watching the rhythm of nature. There is beauty, power and grace. Complex movements are made to look effortless. It is a testament not only to their athleticism, but to the countless hours, patience, dedication, and self-discipline required by each of them to reach this level of communication and performance together.

During the course of the weekend, I spent time hanging over the fence watching Ivory Pal peacefully graze in his paddock. He has an aura of confident, self-containment. He knows his value and while he is proud, as a stallion should be, he is also humble. I spent time in the barn with him and even had the opportunity to sit on his back. While I sat on him, I became totally relaxed and as I sat deep in the saddle, Ivory Pal started backing up. Whatever I was doing, he thought I was asking for a back-up and gave it to me without hesitation. Ivory Pal listens so closely to what he is asked to do, one needs to know the cues in order to ride him.

The pinnacle of my weekend however, was when Ivory Pal came into the house. This was his idea. He came to the door and wanted to come inside. Of course, as a member of the family, there was no reason why he should not do so. I had visions of a large horse slipping on the tile floors and creating mayhem as he tried to escape. How wrong I was. Ivory Pal was completely at home. To compensate for the slippery tile floor, Ivory Pal imitated the short choppy steps of his partner, Rafael. Quiet, gentle and curious, he greeted and honored me by bowing his head and allowing both me and Simba, the family Labrador, to kiss his beautiful face.

Ivory Pal is everything and more than I imagined him to be. To meet him is to fall in love. What is amazing is that prior to coming into Rafael’s life, Ivory Pal was unjustly labeled as “lazy”, “non-athletic”, and “non-show” material by certain “professional training” barns because he did not respond to and had shut down to the “traditional” training methods practiced in certain circles of the Tennessee Walking Horse world. Knowing Ivory Pal’s background, and seeing how he has blossomed into a confident, superb, naturally gaited, and versatile champion only adds to my immense admiration for both Ivory Pal and his partner Rafael Valle. Ivory Pal is truly a horse in a million!

On May 13, 2006, at the St. John’s Horse Council Horse Show in St. Augustine, Florida, champion Tennessee Walking horse stallion, Ivory Pal, once again entranced the audience with his charisma, talent, and versatility.

Half way through the performance, horse and rider stopped at the center of the arena, Rafael reached over Ivory Pal’s head, removed his bridle and raised it high above his head for the audience to see. He then dropped the bridle on the arena floor. A hush came over the crowd; a moment of astonishment and disbelief at what they were seeing. Even those who knew Ivory Pal and Rafael had no idea of what was about to take place. Ivory Pal’s first saddleless and bridleless public exhibition had been a closely guarded secret!

Spellbound, the audience watched as Ivory Pal performed flawlessly, executing his spins, side passes, and half passes without either saddle or bridle. One spectator was heard to say, in an awestruck voice, “Oh my, the stallion is being ridden bridleless!” Amazing as this was, Ivory Pal ended his bridleless performance by mounting a pedestal and waving with his front left foot to the spectators, many of whom had been moved to tears. Amidst the applause, Rafael then dismounted at which Ivory Pal gave thanks to his audience for their appreciation with a deep and gentlemanly bow.

This was a sensational performance. One which could not help but touch many hearts and one that will be remembered and talked about by those who were present to witness the poetic beauty of true accord between horse and man.

“. . . It is a dance
Between horse and man
Spirits in unity
I will be true
When I ride you
In perfect harmony
When you carry me . . .”

Music and Lyrics to “When You Carry Me” Copyright, Mary Ann Kennedy.