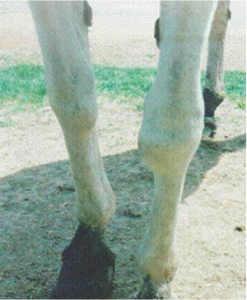 In recent years, researchers at the University of Minnesota Veterinary Medical Center have identified a crippling form of arthritis that seems to primarily affect Arabian horses, at least in the upper Midwest. This syndrome involves apparent instability of the carpus (foreleg “knee”). This eventually leads to a bony reaction that resembles the callus from a healing fracture and can be seen on the inside of the leg.

The bone tries (and occasionally succeeds) to bridge the lowest joint in the carpus in order to increase its stability. This is a low motion joint and would not be missed if it were to fuse but the inflammation affects the upper joints. In other words, by the time the lower joint fuses, the upper joints are also arthritic.

Horses have a gradual onset of increasingly severe lameness that seems to coincide with the development of the bony protruberance on the inside of the carpus (see photo). The affected horses resent flexion of the carpus (i.e. can be sore after farrier work). Most affected horses are lame enough that they cannot be ridden.

To further investigate this, we found 31 horses with the unusual form of carpometacarpal joint arthritis. 74% of the affected horses were Arabian. The problem affects older Arabians, and the average age at presentation for the initial diagnosis was 14.4 years. It seemed to affect mares and geldings at even percentages. In 7 horses, both forelegs were affected. Two horses were still in work when evaluated but the others were too lame for riding. None of the horses had previous leg surgery but 8 had known episodes of trauma to the carpus. At the time of the study, 10 horses had been euthanized for severe lameness. Five horses lived over 5 years after being retired from riding. Four of the affected horses were necropsied (autopsied), and the anatomy of the carpometacarpal joint was examined.

During the necropsies, two different types of connection between the medial splint bone and the cannon bone were found. In most horses, these bones contact each other at two sites. In some, the caudal articulation (back connection) is missing, leaving a gap between the bones. In Minnesota, 46% of Arabians and 13% of non Arabians are missing this articulation and have the gap. When horses in California and Florida were examined, this type of anatomy was not seen. When the bones were examined, the Arabians in California did not have a missing connection.

Based upon our work, we suspect that horses having a gap in the back part of the carpometacarpal joint cannot withstand trauma to the carpus as well as other horses. Injury could then lead to instability and arthritis. Obviously injuries cannot be prevented (particularly in horses) but the increased risk in Arabians makes it important that we recognize the problem and deal with carpal injury more aggressively than is routine. Surgery to fuse the lower joint may help prevent the continued joint degeneration and allow these horses to remain in work.