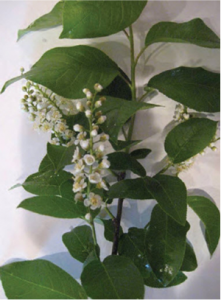 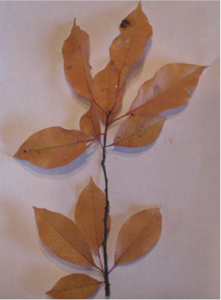 Origin: Native to Canada, chokecherry is a widely planted species that has been cultivated since 1724.

Lifecycle: Chokecherry is a perennial tall shrub or occasionally a small tree.

Identification: Chokecherry reaches a mature height of 6 to 10 feet and has an irregular, rounded top, often with a crooked or leaning trunk. The leaves are toothed and usually ovate. The long spikes of flowers bloom in June and the “cherries” ripen in August.

Distribution: Found from Newfoundland to Saskatchewan and south to North Carolina and west to Kansas.

Habitat: Chokecherry commonly grows on open sites with rich, moist soils, such as along fence rows and streams, on cleared land, and bordering wooded areas. It is relatively intolerant of shade.

Signs and effects of toxicosis: Animals are most commonly found dead within minutes to a few hours of ingestion of the plant. Rarely, terminal seizures may be observed.

Treatment: The opportunity for treatment is rare. Sodium nitrite and thiosulfate may be administered in an attempt to treat cyanide toxicity.

Other information: The fruit of chokecherry (and other cherry species) is not poisonous to humans and is commonly used for making jams, jellies, pies, sauces, and wines.