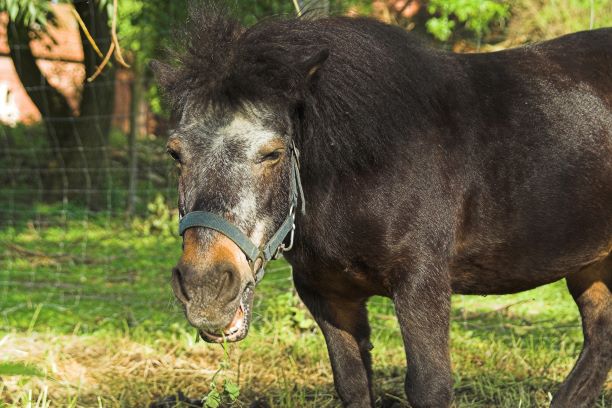 Disorders related to carbohydrate consumption in the horse have received much attention by owners and researchers alike, resulting in widespread concerns about feeding horses carbohydrates (CHO). These include metabolic syndrome, history of laminitis, Cushing’s syndrome as well as many muscle disorders. But in reality, the majority of a horse’s calories should come from carbohydrates and there is no way to avoid them in the horse’s diet.  Rather, understanding all of the forms in which CHO are found, and identifying horses at risk for CHO disorders will allow selection of the appropriate feeds for health.  While the terminology may seem daunting, once owners understand the types of carbohydrates found in horse diets, they may find it easier to sort through the myriad of feeds and products centered around carbohydrates.

Carbohydrates are just molecules composed of carbon, hydrogen and water and appear in many forms.   Here are some common terms you will encounter:

Usage of carbohydrates by horses

Oligosaccharides have been used in animal nutrition to supply a source of prebiotics to the animal. Prebiotics are resistant to digestion in the foregut of the horse but are digested by bacteria in the hindgut.  They can supply a source of nutrition to support the growth of beneficial bacteria and perhaps reduce the population of disease causing or pathogenic bacteria. Due to these properties, oligosaccharides are often used as an alternative to feeding antibiotics in livestock.  While feeding oligosaccharides to the horse has not been proven to have immune enhancing as reported with other species, they do appear to have beneficial effects on gut health in the horse.

Fructooligosaccharides (FOS) may help prevent GI disturbances due to diet changes or CHO overload.  In yearling horses, feeding FOS reduced fecal pH and increased the production of volatile fatty acids from the hind gut.  FOS supplementation also decreased the incidence of diarrhea when fed to foals and has also been shown to have a protective effect on the development of foal diarrhea when fed to their dams.  It is not known if that was an indirect effect passed through the milk, or if the foals simply ingested some of their dams feed containing the supplement. Mares fed FOS while nursing did have foals with a larger growth rate than control mares, but similar effects were not seen when FOS were directly fed to nursing foals.  FOS may even improve the health of horses with carbohydrate related disorders, as FOS supplementation improved insulin sensitivity when fed to obese horses. Therefore, oligosaccharides can play a significant role in horse nutrition.

Unfortunately, all oligosaccharides are not equal. Fructooligosaccharides also belong to the category of carbohydrates labeled as fructans commonly found in forage.  Fructans serve as a storage form of CHO in plants. Many horse owners have heard of fructan as a risk factor for pasture associated laminitis.  A sudden increase in fructan in the diet can alter the microbial population in the hindgut which may then subsequently lead to the development of laminitis.  Fructan concentrations in grasses vary with both season and time of day. Fructan concentrations are highest in the spring, lowest in the summer and intermediate in the fall.  During the day, the process of photosynthesis results in the highest concentrations of fructan in the afternoon with sometimes half as much in the morning or evening hours.  Grazing practices of horses with previous bouts of laminitis should therefore be monitored carefully.

Polysaccharides – fiber and beyond

Most often we think of starches and fibers as the common polysaccharides in the horse diet.  While they are made up of very similar monosaccharides, the arrangement of those sugars and their chemical bonds result in very different usefulness to the horse. Carbohydrates linked with alpha bonds can be digested in the foregut and allow the monosaccharides to be absorbed intact. This absorption of primarily glucose triggers insulin release in the horse. Starch is composed of only glucose joined by alpha bonds, and occurs in either linear form known as amylose or a branched form, amylopectin. The type of starch will impact the speed of digestion, and thus insulin response.

In contrast, cellulose, hemicelluloses, and pectin all contain beta bonds, and will need to undergo fermentation to provide energy to the horse in the form of volatile fatty acids. Cellulose is linked by a beta bond, so it must be fermented. Pectin and hemicelluloses are also common polysaccharides found in the horse diet.   Hemicellulose, compared to cellulose, is a mixture of monosaccharides including xylose, glucose, mannose and galactose.  Pectin is made up of beta linked galacturonic acid, arabinose and galactose.  Pectin and hemi-cellulose are more rapidly fermented than cellulose and increase the percent of the feed that is digestible.

Now that we know what different types of CHO that exist in the horse’s diet, let’s look more closely at some differences that occur in forages.  Forages will contain more structural CHO (cellulose, hemicelluloses and pectin) due to the greater proportion of plant cell wall than cell contents.  This is what gives plants their rigidity and allows them to grow upright.    Forages will also have non-structural CHO or NSC in the cell contents, though certainly not in as high of concentration in cereal grains.  The NSC is a mixture of monosaccharides (glucose, fructose etc) and disaccharides as well as starch and fructan.

If we compare common forages, cool season grasses are made up of primarily cellulose, then hemi-cellulose and fairly small amounts of pectin.  Cool season grasses include Kentucky Bluegrass, orchard grass, fescues and ryegrass.  Legumes, which are typically high in digestible energy are relatively higher in pectin.  Legumes would include alfalfa, clover, lespedeza and peanut hay. Warm season grasses grow and mature more rapidly and have much more cell wall/kg DM and thus much more fiber.  Warm season grasses include Bermuda grass, switchgrasses, and bluestem.  Therefore warm season grasses at a later stage of maturity may be ideal for horses with carbohydrate sensitivities due to their “safer” form of carbohydrates.  In general, there is a higher proportion of cell contents in a younger, or more immature plant.  This makes grasses or hays harvested at an earlier stage more digestible.

The storage form of CHO that the plant uses for energy differs between forage type. Legumes and warm season grasses store primarily starch, while cool season grasses prefer to store energy in the form of fructan with much less starch.  There is also a limit to how much starch the chloroplasts of warm season grasses and legumes can contain, yet there is no limit to fructan accumulation.  Fructan also accumulates more to the base of the plant and more so in the stem than in the leaf.  Overgrazing of pastures can result in greater intake of fructan than owners may realize. Cool temperatures and droughts may also increase the fructan production by the plant.  Anything that promotes photosynthesis but retards growth ends up increasing NSC (lots of light with cool temperatures).   Therefore, be especially careful to observe growing conditions, especially if the horses are consuming cool season grasses and have carbohydrate sensitivities.

Overall, carbohydrates are the cornerstone of equine diets.  While terminology can be frustrating, it is important for all horse owners to realize what they are to be able to understand if they either need to be added or restricted to their horse’s diets, and in particular which type of carbohydrate needs to be targeted.