Fall is here already. Where did the summer go? I had vowed that this summer would be different from last year, when Chase was diagnosed with colon cancer just after the 4th of July. The rest of that summer revolved around his care and cancer treatments. Then we discovered in September that Bandit had multiple myeloma, and life revolved around his care and treatments too. One season blurred into another, until Chase’s CT scan in February showed no evidence of disease, and we lost Bandit to multiple myeloma in March. This summer was different.  Our mellower little pack was still grieving, and finding its way without Bandit. Chase took on the role of pack leader for the dogs. Sometimes Gingersnap the cat seemed to want this role too, but Cay was always content to follow. When Bandit’s health was failing early this year, Chase clearly wanted the pack leader position. Now that he has it, he sometimes seems a bit overwhelmed realizing the responsibility that Bandit had.

Getting out and about is easier with two dogs than with three dogs, at least when they have to be on leash. We’ve found new places to walk and explore, including a trail by the river near home, and the levy going out to an island in the middle of the river in a nearby town. When out in public walking, Chase had become more protective when other dogs approached. He seemed to have learned this from Bandit and was taking other dogs too seriously for me. Chase loves people and wants to meet everyone, but this thing about other dogs had to change. My herding dogs get upset when a dog on a leash is dragging the person along or lunging out at the end of the leash. Clearly this is out-of-order rude behavior and the person should be in control, so some herding dogs want to fix the situation by correcting the other dog. I’ve told Chase that it’s not his business and I’ll manage the situation. I protect his space and, when necessary, I put my body between Chase and the other dog. I tell Chase to ‘leave it’ and reward him for complying. We’ve been working on this and he’s getting better, even though dogs who look out of control still concern him sometimes.

Over the summer we took several trips to Wisconsin to visit my family. Both dogs rode along and enjoyed visiting. Cay hadn’t traveled much before, so this was new for her. She has become more outgoing with people and eagerly solicits petting. She takes up more space than before, when Bandit sometimes herded her into the corner.

When Cay had the opportunity to play with my niece’s children, she amazed me. While the 5 year old girl threw the ball for Chase, the 2 ½ year old little boy threw the ball for Cay. Cay is seven years old and has never retrieved a ball for me. So I was astounded to see her retrieve the ball over and over and over for the little boy. She took it back to him and set it down on the ground in front of him. Something magical was happening with Cay and this little boy. She was so good with the kids that I think she may have potential to join the R.E.A.D. program at the library. I plan to enroll her in the class this winter to prepare for the test. To this day, she has never retrieved a ball for me. She runs around with the ball and plays keep away! 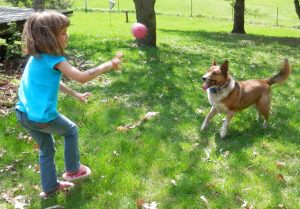 Over the summer, we tended to Bandit’s memorial garden and spread his ashes in many of the places we had enjoyed together. Grief can be a long process, especially grief for a being who taught us so much and was an important part of our daily life. Last week I finished making a digital photo book of my last walk with Bandit and included the story of the bald eagles who visited frequently to lend strength and comfort before and after his passing. The following morning as I drove Chase and Cay to a routine vet appointment, a bald eagle touched down on the grass on my right and then flew across the road in front of my truck. This was in the middle of town, just a block from the vet clinic where Bandit crossed over. I was stunned. 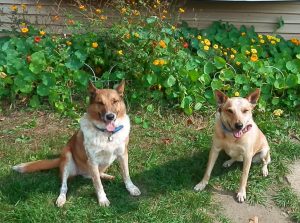 I’m still catching up on things that I didn’t get to last year, like staining the deck. I bought the stain before July 4th last year and then… well you know what happened. The time with family and friends this year has been wonderful. And of course the time with the dogs is precious as it always has been. The nightly mouth joust between Cay and Chase is comforting. 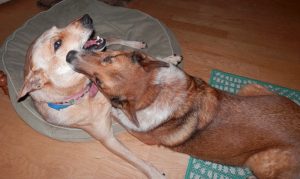 When I run into people I haven’t seen for a while, I tell them why I ‘dropped out’ of regular activity for a while, and that we’re slowly getting back on track. I think about the decisions I made last year and how sometimes you just have to go for it, not knowing whether your best effort can bridge the gap between where you are (the disease) and where you need to be (the remission or cure). I took my best shot for both Bandit and Chase, knowing that my best shot might swish through the net or might just fall short of the goal.

I’m working on a new book in memory of Bandit, based on a true story about my three dogs. The story will remind children to appreciate and pay attention to their pets and will highlight the gifts that we bring to each other. This is an important message for adults too.

As we move into fall, our little pack is still finding our way, knowing that we’re no longer ready for a three dog night*. We are ready for a two dog, one cat night though. For now, that’ll do.

* On cold nights, Indigenous Australians slept in a hole in the ground while embracing a dingo, a native species of wild dog. A very cold night was considered to be a “three dog night”.

Kids at the local library improve their reading abilities by reading out loud to Chase. When people pet Chase’s soft coat and ask me how it gets to be so soft, I tell them about Omega Fields Canine Shine and Omega Nuggets.>>>