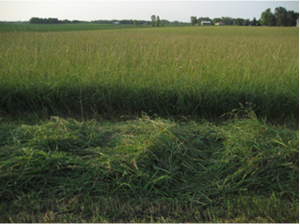 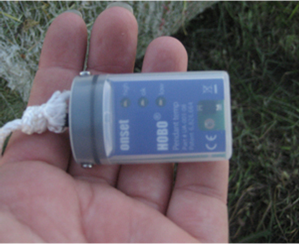 Harvesting hay can be complicated by poor drying conditions (i.e. high humidity and heavy dew) and the threat of rainfall [1]. In an effort to avoid rain and other adverse weather conditions, hay is often baled before it is dried to recommended moisture levels, resulting in mold development and reduced forage quality [1]. Hays baled at moisture levels less than 15% are assumed to be relatively stable, and typically exhibit little evidence of microbial respiration [1]. The development of mold in baled hay is positively correlated with the moisture concentration of the hay at baling [2]. It is common knowledge that horses are highly sensitive to several molds, and that ingesting moldy feed can result in both short-term and long term respiratory problems, specifically heaves, and gastrointestinal problems, such as colic [3].

In Sweden, researchers investigated wrapping individual round bales of grass hay in plastic at 35% moisture [4]. Wrapping bales at this moisture level resulted in minimal fermentation, and the resulting forage was offered to equines without causing adverse health effects. The objectives of this research were to determine the effects of initial bale moisture and plastic wrapping on mold formation in large-round bales of orchardgrass hay.

How the research was conducted

Over a 2-year period (2008 and 2009), 40 4 x 5-foot round bales (16 in 2008; 24 in 2009) were baled and tied with three revolutions of net wrap from a 37-acre orchardgrass (Dactylis glomerata L.) hay field (Figure 1). All harvested forage was obtained from the initial growth (first crop). Targeted moisture ranges at the time of baling included less than 15%, 18 to 25%, and 30 to 35%. Moisture at time of baling was estimated with a forage moisture probe and later confirmed through forage analysis. The bales were stored outside on a well-drained sod surface in one continuous row running east and west. Bales within a treatment were butted tightly against each other, and non-treatment bales were placed between treatment groups and on both ends of the row. Each year, the treatments were applied in a completely randomized design with four replications. In 2008, treatments included the three moisture targets without plastic wrap, and bales made at 30-35% moisture that were individually wrapped with plastic. In 2009, plastic wrapping was added to all three moisture targets, resulting in six baling treatments. Wrapping cost approximately $10 per bale.

Immediately following baling, each bale was cored six times, and samples were analyzed for forage quality by a commercial forage testing laboratory. Forage quality components included moisture content, crude protein (CP), acid detergent fiber (ADF), neutral detergent fiber (NDF), equine digestible energy (DE), calcium (Ca) and phosphorus (P). After sampling, three temperature data loggers were placed in each bale about 24 inches from either flat end of the bale at depths of 15, 28 and 45 inches from the top of the bale (Figure 2). After temperature sensors were placed, designated bales were immediately wrapped six times with one mil plastic wrap with a bale wrapper (Figure 3).

Temperature sensors recorded temperature every hour for 7 (2008) or 10 (2009) weeks. After the temperature sensors were removed, six additional cores were taken from each bale to determine forage quality and mold counts. Data were analyzed and significance was declared at the P < 0.05 level of confidence.

Initial bale moisture differed among treatments. However, the low moisture treatment in 2008 was slightly greater (17%) than the target moisture range of less than 15%. However, this moisture content proved to be critically important. Other moisture contents at the time of baling were within or near moisture targets (Table 1) and were harvested in 2009. Maximum bale temperature for 21 and 33% moisture at baling was much greater compared to 12% moisture at baling. All other treatments had similar maximum temperatures compared to 12% moisture. Spontaneous combustion becomes a concern when internal bale temperature reaches 150°F and is likely at 190°F. Spontaneous combustion was not observed in this study, but unwrapped bales baled at higher moisture contents exhibited heat damage (Figure 4).

Twelve percent moisture bales had lower mold counts compared to bales baled at 17 to 33% moisture and were not different compared to wrapped bales, regardless of initial bale moisture. Aspergillus mold species were found in all treatments except 12% moisture, cladosporium was found in all unwrapped treatments, and fusarium was found in the 17 and 12% moisture bales and the 18 and 26% moisture wrapped bales. Asperigillus and fusarium species are commonly found in insufficiently dried hay and can lead to production of mycotoxins [5].

Our results agree with previous research that determined alfalfa (Medicago sativa L.) and mixed grass-legume hays baled at moisture concentrations less than 15% are relatively stable in terms of mold growth and forage quality [6]. Orchardgrass hay baled at 12% had low mold counts compared to unwrapped bales harvested at 17 to 33%. In contrast, large round bales of mixed alfalfa-orchardgrass hay were prone to spontaneous heating when initial concentrations of bale moisture were greater than 16% [6]; which is consistent with our results.

Although both 12 and 17% moisture bales had similar maximum temperatures, the difference between mold counts can be partially explained by heating degree days (HDD). Accumulated HDD are the summation of the daily increments by which the average internal bale temperature was greater than 86°F. In other words, the unwrapped bales in our study remained warmer longer, which is an indication of microbial activity or molding, and likely provided a better environment for mold growth. The 12% moisture bales resulted in 47 HDD compared to 209 HDD for the 17% moisture bales.

In comparison, the 33% moisture bales resulted in over 1,200 HDD and the extremely high maximum temperature likely killed some of the mold, resulting in a lower amount of mold for this treatment compared to the 17 and 21% moisture bales (Figure 4).

When we baled orchardgrass at 17% moisture, mold counts were similar to unwrapped hay baled at 21 and 33% moisture. Based on these findings, we conclude that orchardgrass packaged in large round bales is susceptible to molding and forage quality losses at relatively low moisture concentrations.

Previous research has demonstrated that wrapped orchardgrass round bales at moisture concentrations of 46% were relatively stable after unwrapping for as long as to 32 days during the winter [8]. Hay wrapped at 35% moisture was fed to equines without causing adverse health effects in Sweden [4]. Others have observed surface mold between the hay and plastic wrap when dry hay (less than 15% moisture) was wrapped [8].

All feeds contain some level of mold, even feeds properly harvested and stored. Table 2 outlines feeding risks and cautions developed for livestock based on mold counts (mold counts total the amount of all mold species found in a sample). Using these recommendations, all wrapped forage and 12% moisture bales would be considered desirable equine forage. Seventeen to 33% moisture unwrapped bales resulted in greater than 5 million cfu/g of mold, and were not appropriate equine feeds. Because horses appear to be more sensitive to mold compared to other livestock, we recommend horse feed (hay or grain) contain less than 1 million cfu/g of mold.

* Risks refer primarily to effect of mold without regard to possible mycotoxin content. Dust may also reduce feed consumption.

Maintaining forage quality and reducing mold growth was achieved by baling dry (12%) hay or wrapping, regardless of initial moisture, round bales of orchardgrass hay. Therefore, the current moisture threshold of 15% for safe storage of other hays also is appropriate for orchardgrass.

This recommendation should be carefully followed; orchardgrass bales were prone to significant molding and forage quality losses at moisture concentrations (i.e. 17%) slightly greater than 15% moisture. This abrupt line between high-quality and moldy hay is likely one reason some horse owners assume it is difficult to harvest and feed quality round bales to horses.

Wrapping higher-moisture orchardgrass round bales is an effective method for maintaining forage quality. However, the stability of higher moisture bales after unwrapping and during feeding, especially during the summer months or with intermittent feeding schedules, needs further investigation.

Acknowledgements: This research was funded by a grant from Midwest Forage Association with additional support from Kemin Industries, Inc. and Cropland Genetics.