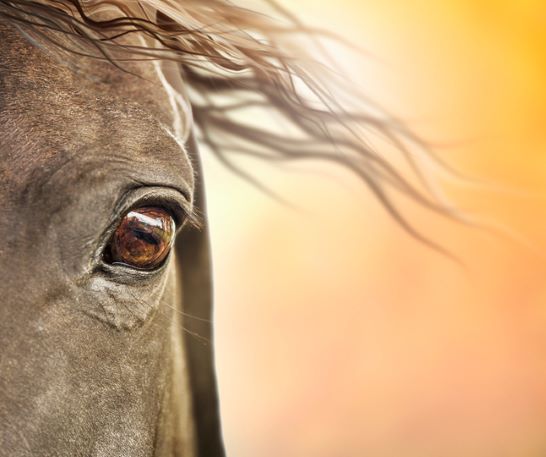 Horses can’t see color. …
False. While older text books that still exist will say that horses (or all animals for that matter) don’t see color, we now know that isn’t true. Several studies have documented that horses do indeed see color, just a bit differently than we do. Humans have trichromatic vision, which means we see reds, blues and greens, while horses have dichromatic vision or see in blues and greens. The difference in vision is due to the type of cones in the eyes – which are the cells which detect photopigment. Essentially a horses version of the world is a bit more muted in color than ours– more of a yellow olive bluish tone. Practically this may mean that brown things look similar to green things in a horse’s world. Wonder how they test equine vision? Researchers train horses to essentially perform a color vision test similar to children prior to the development of language skills. The test horses were trained to independently perform a chain of behaviors to prevent the horse picking up any inadvertent cues from human handlers. The horses were trained to stand in a waiting station marked by cones, and remain behind a horizontal PVC bar until the test was ready to begin. The horses then had to perform a discrimation test to test their vision. Two color plates would appear from behind sliding plates, and the horse would approach and hold their nose at the correct plate until receiving a reward or hearing “no” ( a non reinforcement marker for those in the dog training world). After either receiving the reward or hearing no, the horses would return back to the waiting station until the next trial. What clever test subjects! The horses learned to pick the slide where they could see a circle in the background color. The test did confirm that horses are red green color deficient.
Are there practical implications for color vision in horses? Essentially, dichromats, like horses, are able to see better in low light which is more useful for them to navigate often rough terrain at all times. While horses have been jumping green jumps in brown dirt arenas for a very long time, in 2014 researchers found horses to be more likely to make errors jumping blue versus green jumps while performing in an indoor arena. These differences disappeared in the outdoor turf arena. Most likely they use other visual cues (hue, brightness, depth) to traverse their world with ease.
And while we are on the subject of vision, objects horses have seen with one eye (or on one side of their body) are recognized with the other eye.