The arrival of spring brought a wonderful message about a new beginning that brightened my day. Remember my 2012 story about the spirit dogs of Bimini (https://www.omegafields.com/blog/spirit-dogs-of-bimini/)? In March I received a message from Johanna, who rescued the yellow dog in the story that reminded me of my dog Cay. Johanna founded a rescue organization to help the dogs of Bimini. She wrote:

Dear Jenny, I am the founder of Island Paws Rescue, a nonprofit dog rescue with a mission to save the dogs in Bimini. I recently came across your story of the Spirit of the Bimini dogs and realized that my dog Luca, is in the photo, known as yellow dog. We rescued him 2 years ago and then started the nonprofit. He’s our love! What a small world… Please check out our fb page: https://www.facebook.com/IslandPawsRescue

Johanna’s note reminded me that one person really can make a difference. I was elated to learn that Luca has such a wonderful home. The photo below shows Luca with another rescued dog he’s helping to foster. 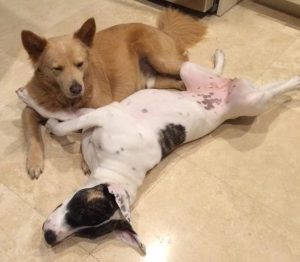 I felt the depth of Luca’s spirit back in 2012, and hoped he would find a wonderful home. Now he’s helping rescue other dogs. How cool is that?

Speaking of new beginnings… Have you ever experienced a moment when told someone your dog’s background and they responded that they never would have known that your dog was abused, or that your dog was a feral pup when you got her? And you paused for a moment, and realized just how far your dog has come, and how proud you are?

Cay and I recently completed a therapy dog class. She learned all of the exercises, including walking through a crowd, accepting a physical exam by a stranger, and navigating around wheelchairs and other assistive devices. I remembered when Cay first came to live with us and it took two people to pull her out of the travel crate. Cay and her puppy littermates had been rescued in the wilderness in Tennessee. She was so afraid of everything, including being touched (http://www.8statekate.net/wordpress/?p=2375). After she’d had some time to settle in at home, I enrolled her in an obedience class. The first time we went to school she was so concerned about the activity in the room and anything happening behind her that she spent much of the night spinning around in a circle. Most of the first few weeks of class were spent helping her adjust to being there. 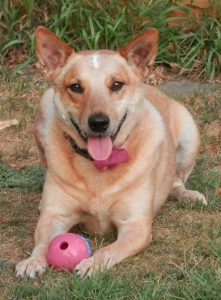 Over the months and years, Cay rode along with Bandit and Chase and me to herding activities and other dog events. She met new people, saw different animals, and got used to hanging out. Over time, Cay did the growing mostly on her own. We simply provided love, healthful food, a safe environment and good experiences. I hadn’t really noticed just how far Cay had come until her wiggly butt greeted strangers in the therapy dog class, and she decided that the wheelchair was her best friend once she discovered a treat on it. When I told people in the class she had come to us as a practically feral pup, they were surprised. And I experienced that moment… 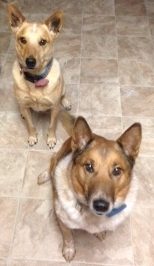 In February, Chase and I visited the local elementary school for “I Love to Read” day. I read them the true story of Chase the Library Dog (share.shutterfly.com/action/welcome?sid=2Ics3LlsxYsl2). About halfway through the book, I realized that while the kids were interested in Chase’s story, they were pretty well preoccupied with snuggling and petting him. I thought for a moment that if I stopped reading the book and just faded into the background, Chase and the kids would continue to enjoy being together and might not even miss me. And that was ok with me.

In March, Chase and I had a fun day at the library. We visited with the librarian and adult library patrons, including an older woman who petted Chase as she reminisced about her dog. Three super kids read fun books to us, and we got to visit with their younger siblings too. And I had one of those moments when someone asked me about Chase’s background. I told them that we think he’s a smooth coated collie-Australian cattle dog mix, and that my friend Sarah, who I met in Louisiana helping care for rescued animals after Hurricane Katrina, rescued Chase in Virginia. I remembered how Sarah saved Chase from a violent man who had stuffed him in a tiny chicken crate and was going to shoot him for chasing sheep. That Chase shook in fear on her lap for a couple of hours until he realized he was safe. And I thought about how amazed people are when I tell them that Chase loves everybody now and that he led me into volunteering at the library. I was reminded of the many miracles that brought Sarah and me and then Chase and me together. God must have been winking all along the way. 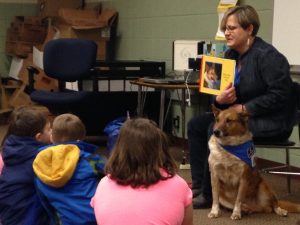 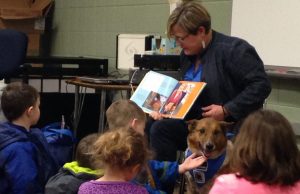 March 15th marked one year since Bandit’s passing. We miss him, as we’ve been finding our way without him. We’ve had several visits from bald eagles that indicate his spirit is still with us. Several times per week a bald eagle flies over the highway in front of my truck, timing it just right. The week of March 15th, a bald eagle flew over our front yard when the dogsitter was outside with Chase and Cay. She texted me that “Chase was so funny today. We were playing catch for a long time and then an eagle flew over and Chase spent the rest of the time cry-barking trying to herd him in hahaha.” This new dogsitter hadn’t known Bandit (our other dogsitter was on vacation). I replied that Chase talks to the eagles and that bald eagles were around a lot just before and after Bandit passed, and now I see them everywhere. She said, “It’s a sign that Bandit is saying hi to his siblings!” It was a long week, but this made my day.
As Bandit would say: “Be, Play, Love. Enjoy this day!” Healthful food and Omega Fields Canine Shine and Omega Nuggets have been instrumental in supporting my dogs to grow up healthy and happy. https://www.omegafields.com/canine-products.html