Last fall I wrote about moving my four-legged family from Minnesota to Wisconsin to be closer to my extended family. This first involved a move to live in my parents’ house while our Minnesota house went on the market and I started a new job. The dogs and I stayed with my parents for about six weeks until they went to Florida for the winter, then took care of their 17-acre place over the winter. We sold our Minnesota house in December and began the search for our new home in Wisconsin. 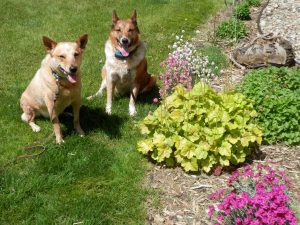 Our home in Minnesota, on five acres next to a state park, was the only home Chase and Cay had really known. They had both lived there for over seven years. The move seemed to be especially hard on Chase, who had taken on the role of protector after we lost Bandit to multiple myeloma in 2014. Chase took this role very seriously and sometimes it seemed to be a bit overwhelming for him. We had visited my parents’ place many times, where the dogs love to run and explore, but previously we had not stayed there for more than an extended weekend.

After the big move, we returned to Minnesota for the first time to move another load of belongings from the garage and outbuildings. Chase was very excited to be back home, but his face almost literally fell when we entered the house. He must have expected everything to be back the way it was before, but with the house almost empty (as we had left it), Chase was clearly very disappointed that our stuff was gone and we weren’t back home for good. Cay seemed to be taking it all in stride more easily than Chase, maybe because we all stayed together and she didn’t feel the burden of being a protector. 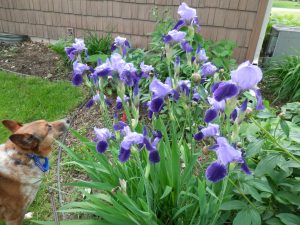 At the beginning of May, we moved into our new home in Wisconsin. But the path to getting here wasn’t always clear or easy. When she recently visited our new house, a friend remembered what I’d described last fall as our ideal new home, and said that we have found it! I looked back at what I had written last fall and she was right. But many times along the way I wondered how this would turn out. There aren’t many houses on the market here and the competition is stiff. You have to know what you’re looking for and act fast if you find it. The first house I made an offer on fell through when an inspection found major problems that the sellers hadn’t disclosed. I was so disappointed, thinking we were that close to finding our new home, and we had to start over. I had been driving around the neighborhoods near my workplace, and found an area that I really liked. I chose one particular house and held that vision in my mind. Not many homes had come up for sale in that neighborhood in the past year, and most that had sold were above my price range. So when the house right next door to the house I’d been focusing on went on the market, I was a bit stunned. But not too stunned to act fast.

The result is that we’ve landed in a beautiful home with 0.7 acres that’s less than a mile from where I work. The neighborhood is stable and dog friendly, with a nature conservancy just down the block, that has trails allowing leashed dogs. My commutes to work take a couple of minutes and I get to come home at lunch time to walk the dogs. When I began looking for a home, I didn’t know this was possible. I’m glad I took the time to explore the neighborhood.

The new neighborhood has less traffic than the old one, but our house is closer to the road than before. There’s more foot traffic and dogs walking by. The yard isn’t fenced yet, but our new fence is on order. So far the dogs have had to be on leash most of the time, and we can’t easily play ball here. I’m looking forward to getting the fence so the dogs can have the freedom to run and play ball in the yard, something we practically took for granted with the large fenced areas we had before.

Chase has been very protective here, erring on the side of caution when a strange dog walks by or a bike goes up the hill past the house. I’m teaching him the boundaries and that dogs and people and bikes going by aren’t a threat. He’s learning the neighborhood and has met many of the friendly neighbors, which is a bonus for Chase. He loves people! Cay still seems to be taking it all in stride.

When we first moved to Wisconsin, Chase often didn’t eat his breakfast. He may have been feeling my stress as I started a new job. Gradually, he got used to being here and began eating all of his breakfast. Months later, when we moved to our new home, he stopped eating his breakfast again. I had already brought the dogs to the new neighborhood and nearby parks several times before we moved, but once we moved in, the dogs realized that it was their new home. After a few weeks here, with still many boxes left to unpack, Chase is getting back to eating normally again. I’ve learned to try to minimize my stress to help Chase be calm. I also give the dogs calming Rescue Remedy (or Bach 5 Flower Formula) and calming herbs to help them cope. In each living situation, I did my best to keep the dogs on a regular feeding and exercise schedule. And of course, I give them Canine Shine and Omega Nuggets to help keep them healthy.

My friend was right! After a few ups and downs we landed in a great place to live, a place that’s dog friendly that I didn’t even know about before. To my great delight, I discovered that this home also has a fabulous garden, with new surprises blooming every week. And we’re making new friends in the neighborhood, with more time to see ‘old’ friends and family too! 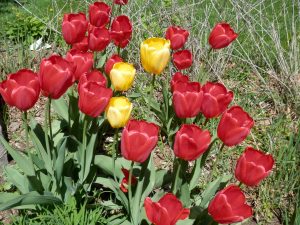