Senior dogs have a special place in my heart. This is the story of a senior dog who ended up in an animal shelter after her owner passed away. Trigger’s days were numbered until a caring person halfway across the country decided that she would not let this dog die. On October 26th, I received an e-mail message from Julie in Ohio. She’d heard about a 14-year-old female Australian Cattle Dog who had been surrendered to a county animal shelter in Arizona on September 12th. A euthanasia date was already set for this old girl, for first thing in the morning on Friday, October 30th, just four days away. 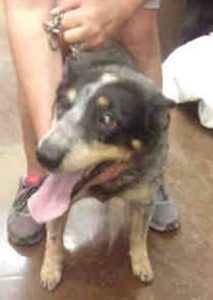 If, for whatever reason, people cannot keep their dog, they often think that dropping the dog off at the local shelter will give the dog another chance. Sometimes this works out ok for the dog, but local pounds and government-run ‘shelters’ are often overcrowded and have limits on the number of animals they can house. A dog that has been surrendered usually is given less time than a stray dog because they know that nobody is looking for the surrendered dog, but someone may come in to claim the stray.

In the e-mail message, Julie offered to pay the $40 adoption fee for the 14-year old cattle dog if someone would give Trigger a good home for whatever time she has left. Having adopted and cared for several senior dogs herself, Julie felt that traveling all the way from Arizona to Ohio would be too much for Trigger. Julie already has a rescued 11-year-old cattle dog that she adopted in early February. Many people would have given up, thinking there wasn’t anything they could do for Trigger, but Julie was determined to find someone closer to Arizona who would act quickly to give Trigger a loving home.

Julie’s 63rd birthday was October 30th, the same day that Trigger was scheduled to be euthanized. Julie could receive no better birthday present than to know that Trigger was safe. So she contacted the shelter and told them she was going to find a new home for Trigger. She e-mailed her cattle dog rescue contacts all across the country, spread the word on Facebook, and contacted everyone she knew who might be able to help. She asked us to please give her the birthday present of keeping Trigger alive and finding her a forever home “with someone who truly cares”.

And that’s when the magic began. A woman in Washington State offered to match Julie’s $40 by donating another $40 toward Trigger’s care. A woman in New Hampshire offered to foster Trigger if there was a way to safely get her there. People all across the country who care about old dogs and love cattle dogs spread the word about Trigger, creating over 300 shares on Facebook. Somehow the word got to Sandra in Arizona, who already had Australian cattle dogs and rat terriers. Sandra had also housed an aged senior from a California puppy mill bust in the past.

On October 28th, Julie paid the adoption fee. Sandra went to the shelter to meet and evaluate Trigger, to see if she might fit in with Sandra’s pack. Sandra had already stated that if Trigger went home with her, she would be going home to stay, but she wanted to make sure her home was a good fit. Once she met Trigger, Sandra determined that Trigger would likely do well at her house and made the commitment to take her home!

On October 29th, Sandra provided an update on how Annie (formerly Trigger) was adjusting in her household. Annie took time to get used to the new house and yard and was given space to get comfortable. Everything was new to her, including the dog door! Later Sandra reported that Annie (as in ‘Annie Oakley’) had gone to the vet for bloodwork, an ear cleaning, a toenail trim and a bath. She was treated for tick fever and roundworms and the vet determined that she had lost her functional hearing. Annie was getting along with the other dogs in the household, and even learned how to use the dog door. Now she has had dental work and had a tumor removed. She’s lucky to have landed with people who can afford the vet care that she needed. 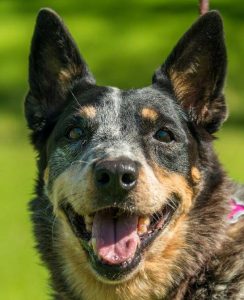 Annie is doing well, and Sandra continues to post her progress and photos on Facebook. The community of people who helped Annie find her forever loving home follow along.
Julie was ecstatic on her birthday, October 30th. She had shown, and learned, how much of a difference one person can make by setting her mind to helping a dog in need. You, too, can help the dogs in need in your community, especially over the holidays when people often get busy with festivities and forget about animals who need help. Even spreading the word about the animals in need in your local shelter can make a difference. Look at what a difference Julie made, along with a supportive network! 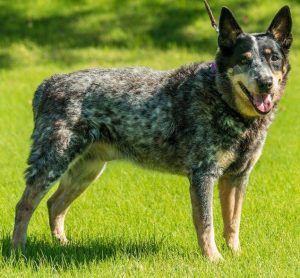 During this season of giving thanks, I’m thankful for Julie, the network of people who helped find a safe place for Annie to go, and of course for Sandra, who took Annie in. 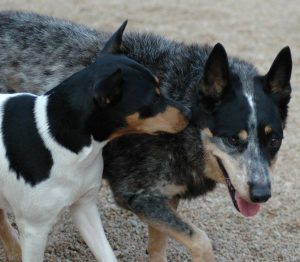 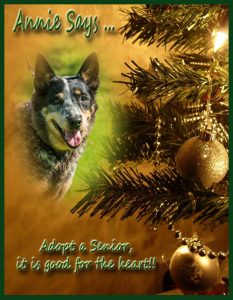 ……..
Looking for inexpensive gifts that will be appreciated by animal lovers? Stay home, spend more time with your animals, and buy gifts that will provide hours of reading pleasure and raise awareness. The hard cover Not Without My Dog Resource & Record Book and paperback 8 State Hurricane Kate: The Journey and Legacy of a Katrina Cattle Dog are on sale for $15 each (+ shipping) – OR – $12 each (+shipping) for any 3 or more purchased by December 10th. Personally signed on request. Inquire for special pricing on Bernie Siegel books Love, Animals, and Miracles (NEW!) and A Book of Miracles. These books include my stories about Chase the Library Dog, Dolphin Healing, and Bandit, My Bolt Out of the Blue, and I will personally sign them as well. Please contact me at Jenny@8StateKate.net with questions and to order. Include BOOKS in the subject line. See the NWMD book trailer video at http://tinyurl.com/ydllqn6. Thank you!