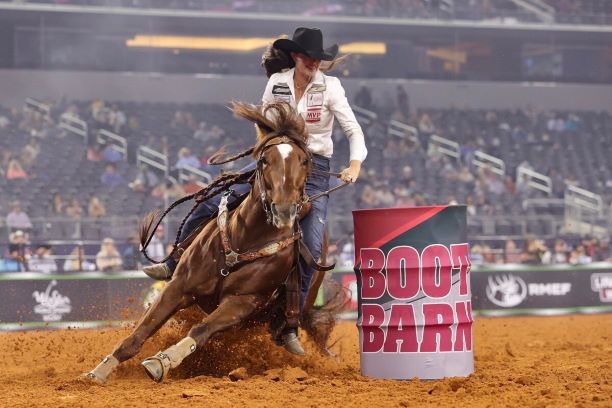 Competing last year in the inaugural event held in Fort Worth and Arlington, Texas, Hanssen made three runs aboard her outstanding mare Vida, putting in just over 44 seconds of work to earn an eye popping $60,000. That’s just about $1,364 per second.

“It was definitely exciting,” said Hanssen, who makes her living training barrel racing horses, spending more time competing in futurities and derbies than out on the rodeo road.

That’s exactly why the World Champions Rodeo Alliance (WCRA) is a great fit for Hanssen.

“The advantages of the WCRA is that they have events that pay a lot of money and on a big stage,” Hanssen said. “For someone like me, I can’t leave my training business to go off rodeoing and try to make the NFR [National Finals Rodeo].”

Through the WCRA’s Virtual Rodeo Qualifier (VRQ), Hanssen and other competitors can nominate events in which they are already competing, earning points which place them on the WCRA Leaderboards and guarantee position at big events like the WRWC.

With its $750,000 total payout, the WRWC is the world’s largest women’s only rodeo event. Ladies compete in barrel racing, breakaway roping and team roping with the champions in each discipline guaranteed $60,000. There is also a bonus of $20,000 to the Women’s Rodeo All Around Champ.

Entering its second year, the 2021 rendition of the event is scheduled for October 26-29 at the South Point Equestrian Center in Las Vegas, Nevada.

Hanssen will be there to defend her title, once again earning the number one ranking on the WRWC Pro Leaderboard.

The WRWC is a tournament type event with athletes advancing through several rounds to earn a spot for the big money in the Main Event on Friday night, October 29. Six of the eight competitors on the final run come through the qualifying rounds while two spots go to the number one ranked competitors on the Pro and Challenger Leaderboards.

The separation of athletes into Pro and Challenger pools is unique to the WRWC. Classification is based upon earnings in both the breakaway and barrel racing while team roping uses existing numbering systems used by the USTRC and World Series.

This “leveling” up allows non-pro competitors the chance to compete against similar level athletes during early rounds at the WRWC and also offers seeding opportunities to the top ladies on the Challenger Leaderboard.

While Hanssen and Lori Diodosio, the number one Challenger barrel racer, are into the Main Event, athletes ranked second through fourth get a bye into the Semi-Finals.

WCRA regular Maggie Poloncic is one of those competitors, finishing the segment ranked third on the Pro Leaderboard. Like Hanssen, Poloncic is a fan of the WCRA.

“The format is really what drew me to their program because when I started, I was working full time. I was part owner in a dance studio and trying to start training horses so I couldn’t go out on the road even though I had a good horse,” Poloncic said of her mare Puff.

“It was nice to have another option where I didn’t have to travel so far from home but I could still run my good horse for the big money opportunities that she deserved to run at.”

Both Hanssen and Poloncic nominated numerous futurities as well as open events to earn their Leaderboard positions and the WRWC offers a Futurity side pot for the first time this year.

Both ladies are looking forward to the new venue for 2021.

“It’ll be our first time at the South Point,” Poloncic said. “I’m excited because I’ve never been there before—sometimes it feels like we run in the same arenas on the same weekends all year long. I’m looking forward to trying something new, shaking things up.”

“It’ll be exciting in Las Vegas,” Hanssen said. “The WCRA works so hard so we know the ground will be good.”

The WRWC rakes at four runners in the Fast Track, Semi-Finals and Final rounds and at five in the progressive rounds. They also hand rake after every run throughout the competition.

Hanssen and Poloncic are part of a tough batch of Pro barrel racers that includes several past Wrangler National Finals Rodeo (NFR) qualifiers like as Stephanie Fryar. Fryar nearly made the Finals again in 2021, finishing the year ranked 16th in the WPRA World standings.

Along with those with proven track records will be a number of competitors are the way up whose names aren’t as familiar to fans . . .  yet. Through the Challenger Leaderboard, a great mix of hopefuls are ready to try their luck including three ladies who make their homes in Las Vegas. Tilly Jenski, Winter Guesman and Cheyenne Tannery are all hoping for a little home court advantage as they run for the WRWC World title.

The sport’s young guns aren’t forgotten with a tough contingent of top youth barrel racers. Barrel racing fans will no doubt recognize upcoming stars like Acey Pinkston, London Gorham and Laura Mote as they vie for the championship and compete in another 2021 addition to the WRWC, the Youth Side pot.

The Women’s Rodeo World Championship will take place October 26-29, 2021 at the South Point Hotel and Casino with a guaranteed payout of $750,000 of which $60,000 will be paid to the champions in each of the disciplines. It is open to all female athletes over the age of 13. Final rounds will be carried on CBS Television Network on October 31.