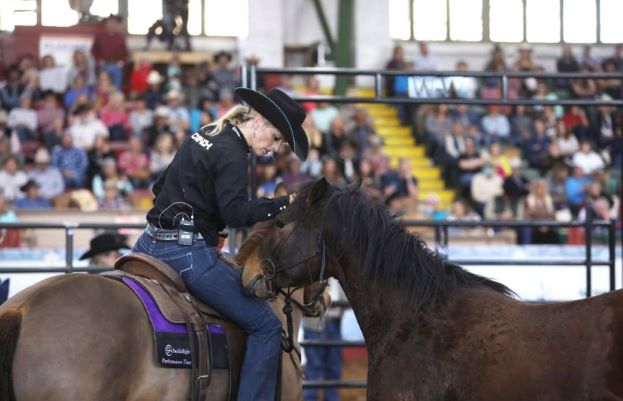 Well, Road to the Horse 2021 is officially in the books! Some very tough competition, and some very tough horses. Six of the best colt starters in the business were in attendance. Omega FIelds is extremely proud of our spokesperson, “Extreme Wylene Davis”! Wylene was one of the three Wild Card contestants to compete at this year‘s road to the Horse. It began on Thursday, March 25th with the wild card challengers doing a mini clinic. If you missed it, you missed out on some great presentations. Wylene stole the show while doing her clinic. Not only was it informative, and understandable, , but she captivated the audience as well!

Wylene was able to showcase her skills and knowledge over the course of this competition. She bested the Wild Cards in round one, and round two with the highest scores. Sunday’s championship was not without it’s share of difficulties for Wylene, , but that didn’t stop her! Troubles catching her colt and a penalty for using her rope, made it hard to catch up on time, and points.. Her colt was distanced and distracted as well making for a real challenge which resulted with an unplanned unseating. True to her Fearless attitude she got back on and proceeded to finish her rail work and perform a nearly flawless obstacle course. Although it wasn’t the performance she had hoped for, she held onto a second-place finish. We could not be any prouder of what Wylene achieved, and are proud to have her as our Omega Fields spokesperson!