The Things We Miss - Omega Fields

Several friends have lost 2-legged and 4-legged loved ones during this past year. The holidays are a busy time when these losses can be especially painful. So I invite you to focus on your loved ones this season, to give them your undivided attention and really see and enjoy them.

One friend lost her Australian Cattle Dog to cancer. She told me that he used to sit by her chair in the evening. She would drop her arm over the side and pet him, unconsciously much of the time. Now when she drops her arm over the side of the chair, it is painfully obvious that he’s no longer there. So I invite you to be aware of and consciously enjoy those small interactions with your animals.

When I watch my dog Chase interact with the kids at the library, I’m amazed at his intuition. Like the time he met a little 5-year old girl for the first time and went into a play bow. She said, “Look Mommy, he’s bowing!” I later learned that the girl was afraid of dogs. After reading to Chase, she told me that he was the first dog she hadn’t been afraid of. I think he went into a bow upon meeting her because having his eyes at her eye level would have been too scary for her. So he bowed to make himself shorter, and of course to invite play.

I’ve learned a lot from Gingersnap, our cat. Last winter she often sat by the north wall of the living room, near a heat duct. I wondered if there was a critter in the duct. But during the summer, I found out that mice were getting in under the siding on the outside of the wall by where she’d been sitting. Ginger was like a pointer for mice. While the mice were out, I filled the hole with foil to keep them out and she stopped sitting there. In September, Ginger hopped up on the stove in the kitchen. She knows she’s not supposed to be up there. But she was obsessing about something in the range hood. She took a swipe at the filter/guard above the stove, her toenail got caught and she pulled the whole thing off. The next thing I knew she was presenting me with a little mouse.

A month or two ago, Ginger sat in the middle of the kitchen floor at night. There was no evidence of mice in the kitchen, and I couldn’t figure out what was drawing her there. Then I discovered little bits of insulation on the floor in the basement below and learned that mice were running along the pipes on the basement ceiling, just below where Ginger sat in the kitchen at night. I’m sure animals sense a lot that we don’t get, and I’m learning more and more from Ginger. Winter came early here this year, and it seems like a lot of mice found their way in.

On November 9th, while walking the dogs by the St. Croix River, I spotted a pileated woodpecker drumming on a pole. I was able to take several pictures before it flew off. In the 25 years that I’ve lived here, I’ve often heard pileated woodpeckers, but can count on one hand the number of times I’ve seen one. A couple of weeks later, I learned that a friend’s fiancé had passed away in a car accident on November 8th.  Pileated woodpeckers had appeared to his family and his fiancé that weekend, and she had remarked that it would be just like Carl, a logger, to visit as a pileated woodpecker. So was it merely a coincidence that I saw the woodpecker that weekend? 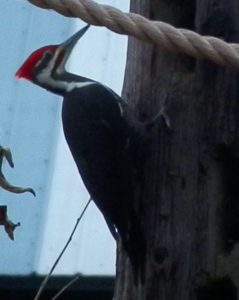 Those of you who have been reading along know that we lost our Australian Cattle Dog Bandit to multiple myeloma in March. On the day that he crossed over and countless times since, bald eagles have flown over our yard and the field where we walk every day. Chase usually spots the eagle first and runs along with it, barking up to it. Often I’ve seen a bald eagle crossing over the highway just in front of my truck as I’m driving 50 mph or more. I don’t know how they do it.

November 13th would have been Bandit’s 11th birthday. There wasn’t much opportunity for me to see an eagle here that day since I had to walk the dogs in the dark that evening. Knowing Bandit’s playful spirit, I figured he’d do something different anyway. When I arrived home from work that day, his stuffed basketball, which had been in the same place on his bed since March, was on the other side of the room, right in my path as I walked through the house. Chase and Cay had been kenneled while I was gone and hadn’t moved that ball since Bandit left us. The ball is too big for Ginger the cat to move. So it felt like a ‘hello’ from Bandit.

On Bandit’s birthday, Chase brought me the jolly ball like Bandit used to, and Cay brought me Bandit’s rubber chicken. They must have sensed his presence too. 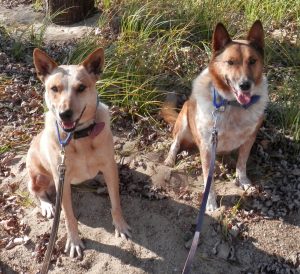 A few days later I was walking the dogs up on the hill, thinking that I should tell a friend the story about the stuffed basketball. Suddenly, Chase took off full speed across the field, looking up at the sky, and let out a bark. I looked up and there was the bald eagle, making a pass across the field. He just made that one pass and then was gone. If Chase hadn’t pointed him out, I would have missed him. Chase continued to look for the eagle in the sky, and barked every once in a while. I think Chase and the eagle were communicating. I wonder if Chase felt Bandit’s spirit in the eagle as I did. I don’t completely understand these interactions, but I’m intrigued by them. Most of us miss so much and understand so little about our natural world. Which brings me back to my original thought. This holiday season, take time to slow down and tune in to the natural world around you. Live in the present moment with your 4-legged friends. Take in and enjoy their essence and the little ways they keep you company. Ponder what you learn from them, or would if you were paying more attention.

The holiday season can get way too busy. So I invite you to sit still with your loved ones and really notice what you’ve been missing, and what you’ll miss some day when they’re gone.  I promise you won’t regret it. Happy Holidays!
~~~
My new book, There’s a Chicken in My Kitchen: Bandit’s Big Birthday Blizzard, is about a blizzard that ‘unplugs’ us and gives us the chance to really see and appreciate our loved ones. Watch for it next year.
~~~
Your dogs deserve the best, so give them the best nutrition with Omega Fields Canine Shine and Omega Nuggets.  Learn More >>