They have today’s game plan mapped out. On the Pine Ridge and neighboring Rosebud Indian Reservations in South Dakota, this “boots on the ground” group, small enough to sit at the same picnic table, has a list of dogs to pick up from calls that came in over the past couple of days. The plan is in place to cover an area the size of the state of Rhode Island. The group knows that the plan can shift at any moment, and it certainly will if these words are spoken at the other end of the line: “There’s a puppy at the dump.” 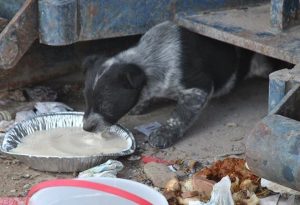 A day headed in one direction is now immediately headed in another. Sometimes the team’s conversation on priorities can be complicated when so many calls are coming in on a busy day, and sometimes the decision is easy. A puppy at the dump is Priority One. If the team hears of one late in the day and cannot find it before dark… sleep does not come.
LightShine Canine (LSC) has rescued more puppies (and even large dogs) dumped or stuck in the massive dumpsters after scavenging, than KC can count. Most of the dozen small dumps and landfills sprinkled around the Reservation have housing nearby. Many stray and free-roaming owned animals frequent them for scavenging, and even for socialization, as people come and go throughout the day. Pups follow Mama there, or get brave and head that way on their own, and yes, they are dumped there. On the Reservation, this is akin to putting a baby at the door of the fire station, the best bet they have for maybe, just maybe, someone finding it. On a reservation without an impound or a veterinarian, where many people live in remote areas, this might be the best they can do. 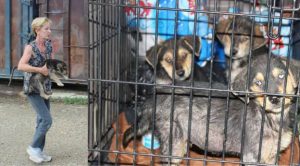 KC Willis first arrived at the Pine Ridge Indian Reservation five years ago to help change the lives of a small group of grandmothers. Since drugs and alcohol were stealing the lives of their grown children, they were raising the next generation. These powerful fabulous women in their 60s, rooted in their land and their culture and their people, became KC’s friends and family.
It was the grandmothers who first began asking KC for dog food…They explained to her how they fed the strays outside the grocery store or on the streets in front of their houses. It was a grandmother who held out a puppy to KC one day and said “Here KC, it’s sick can you help it? Please take it.” And so she did. And then another and then another, until one day KC found herself with a Lakota friend at her side driving the reservation looking for the ones who had no grandmother to pick them up and hand them off. 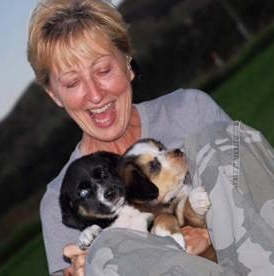 KC didn’t originally go to the reservation to rescue dogs. But with the help of the grandmothers and their request that she do something about a great sadness that walked through their land – thousands of homeless animals who were suffering from over one hundred years of unchecked population growth – LightShine Canine: A Rez Dog Rescue was born.

When KC was criticized for shifting her focus from daily help for the grandmothers to daily help for The Sunka Oyate – The Dog Nation – an elder shook her finger in KC’s face and said “Do not let them tell you that helping the animals isn’t helping the people. You are removing a visible sign of hopelessness from our reservation. We never thought the dog situation could change and we are seeing a change and it gives us hope that if this can change maybe that can change.”

LightShine Canine, a 501c3 non-profit organization, brings the heart of the Lakota and the needs of the dogs together. Their goal is to rescue stray, abandoned, injured and abused dogs on the Reservations, provide them veterinary care, and relocate them to foster-based rescue groups around the country. LSC’s dog rescue work program is geared to ensure that the dogs they rescue and the Lakota who assist with this dream are changed forever. The majority of LSC volunteers and rescuers are Oglala Sioux Tribe members taking ownership of the crisis their animals are in. LSC also offers material and educational support to Lakota families who want to better care for their animals.
Every single day of the year LSC picks up stray dogs (and cats) on the Pine Ridge and Rosebud
reservations. They cover a large territory answering calls from communities that can be two hours apart. They visit the housing areas and the country roads and the dumps, taking into their care the animals that need help. They respond to Facebook messages, texts and phone calls from residents young and old who now have hope and help care for animals until LSC can get there. They respond to calls from the Tribe and from police officers about the locations of dogs in need. On their way to picking up strays they come across strays, dogs who were born not belonging to anyone and who would otherwise die not belonging to anyone. 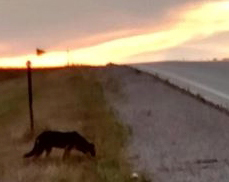 The populations of the two vast Pine Ridge and Rosebud reservations are among the poorest in this country, with no veterinarian inside their borders. The number of homeless dogs is beyond what the community itself can handle, with no animal impound. But last year LSC rescued and relocated over 2,000 dogs from the reservations. In the next decade that will represent tens of thousands who will not be born into suffering. LSC has already rescued over 2,000 dogs in 2016, and expects to rescue 2,600 by year-end. LSC knows they cannot save them all, but still pushes forward with love to make a difference for the ones who are close enough for them to touch.
So when LSC received a call at 10 o’clock on a very cold night from an animal lover who had rescued a puppy from the cold, even though a “no travel advisory” had been issued by the Tribe, LSC worker Pete headed out. With a desire to respond to the needs of his community and a mission to save puppies and dogs one at a time, he drove slowly and surely, and made a difference in one more life. Late that night, he sent out the text, “One male puppy on board… a happy camper”.

When LSC received a call about a pup stuck in a ravine, Pete headed out with a rope and rescued the pup.

When LSC sees a desperate dog in the middle of nowhere daring to get close to the road to search for food, LSC stops to help the dog. Boots on the ground – Paws off the ground. The dog is safe that night, maybe for the first time in its life. 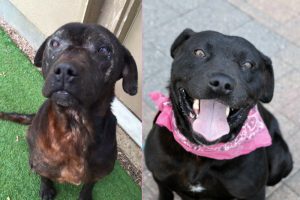 When LSC is asked to help a large dog with a terrible skin condition, they pick her up and take her to one of the veterinarians who work with them to care for dogs who may have never seen a veterinarian before. Months later, a photo of this dog is posted on Facebook. No longer the miserable, hopeless looking dog with hairless patches and dull eyes, she shows off a glossy coat and looks straight into the camera with a sparkle in her eyes. You have to look twice to make sure this dog with the big grin is the same dog, and indeed she is. Then you see that her foster dad has failed as her foster dad and has become… her Dad. Her forever Dad. Another happy ending.

When LSC has a very dark day because dogs have been lost to car hits, to abuse, and even to parvovirus while being rushed to the vet, they hold the heartbreak close. And then they look into the eyes of the pup on the seat beside them who almost starved to death, and they know she is safe. They whisper farewell to the ones they lost, sit up a little straighter in their seats, and with determination and a glance at the face next to them, they say, “Paws off the ground.” Today is a new day. 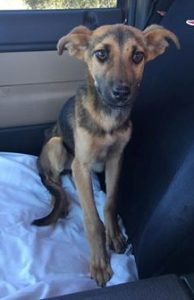 To quote KC, “If we as Rescue do not make a difference in the lives of the animals that cross our path…If we do not show the children what it looks like to step in for the innocent…If we do not honor the elders who fear for an animal’s safety…if we walk away from that because we don’t feel we can ever cross some kind of Finish Line…then we are running the wrong race and we have made it about us. It is not about us accomplishing something. It is about not turning away from something that must be done.” And to quote KC again, “The stray dogs of Native American reservations across this country are the invisible dogs of America. But they are not invisible to LightShine Canine, and now they are not invisible to you.”
With winter coming, LSC is working furiously to help as many dogs (and cats) as possible.
Follow the daily rescue efforts of LSC on Facebook at
https://www.facebook.com/lightshinecanines/?fref=ts and visit their fundraising page at
https://www.facebook.com/LightShineCanineFundraising/?fref=ts
LSC relies on donations to pay most of the gas and veterinary bills for the animals they rescue. You can donate via the following methods:
 gofund.me/SavingTheRezDogs
 Checks can be sent to: PO Box 36, Whiteclay, NE 69365
 PayPal is lightshinecanine@yahoo.com
 “Donate” tab top of Facebook page.
Wopila!