Trust Yourself to Try and Err - Omega Fields 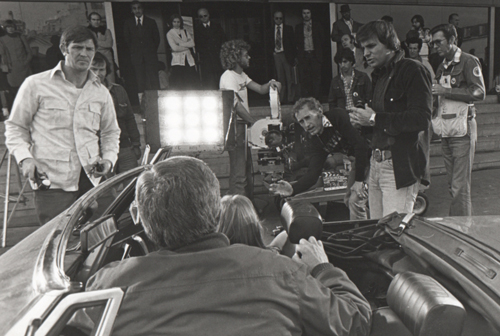 For years I’ve called the process of making Benji movies trial-and-error film making. I always – well, usually – know what I want to see up there on the screen, but almost never know how to get it on film. I remember late one night in Oregon on Benji the Hunted there were about twelve of us crammed and bundled around the camera which was sitting on the dirt pointed down at a tiny little cougar cub who was supposed to be looking up at Benji, pleading with his eyes to not be left alone to be eaten by some larger predator (his mama had been shot by a hunter). The look in the cub’s eyes had to be right. It had to make us (the audience) choke up a little, feel the plight of this poor helpless baby. So there we were, this huge crowd of people all scrunched in a ball gawking down at this wee cub with a bevy of bright lights in his eyes, and I was supposed to be holding the “look” of the cub (as if he were gazing up at Benji) and I was also supposed to be doing something that would evoke just the right expression. Something that would make the cub’s eyes beg pleeeze don’t leave me here…

I squawked annoying sounds, tried to whistle (which I never had learned to do properly), gurgled, cracked sticks, rustled leaves, squeaked… none of which was having any effect. After a moment, the cub began to rock back and forth and I said, “I think he’s falling asleep!” I got louder, but the little guy’s eyes rolled back in his head and his eyelids dropped shut. He was out like a light. After a moment, he plopped over on his side, which woke him up with a start, and we began again. It had to be a funny sight to an innocent bystander. But it took a while for me to see the humor in it as rolls upon rolls of film raced through the camera. We shot up at least twenty minutes worth before finally getting the expression I wanted. I don’t even remember what sound or movement extracted the perfect look… but that particular moment in the finished film is magical. Truly magical.

The point here is we don’t have to know all there is to know every time we enter a new situation. We don’t have to wait and wait until we’re living experts of the moment to give something a try. I’m a huge advocate of book and DVD learning, of ingesting years of experience in a short time from people more knowledgeable than I. But there comes a time when there is no better learning than first-hand experience, of getting out there and trying something. Giving it a shot. Knowing full well that it probably won’t work. But mentally set to keep going. To try something else. And something else again. Until that magical moment happens. Because every mistake is another learning experience and one builds upon another.

I’ve never forgotten the following moment, as described in my book The Soul of a Horse:
Our growing library of books and DVDs all said “begin at the beginning.” which meant standing in the arena teaching my horse to back up, or move sideways. Or come to me. These exercises would give me control, said the DVDs. And once I had complete control over how, where, and when the horse moves, I would then have a safe horse. And only then should I climb aboard.
But I wanted to know why.
I was also anxious to take the next step with Cash. After Join-Up, he was now looking to me for leadership, so off we went to the arena.
I hear we learn by our mistakes.
One of the training DVDs had spelled out three different ways to teach backup.
See Cash back up, Method One.
See Cash back up, Method Two.
See Cash back up, Method Three.
Why, I wondered, did I need three? Especially here, beginning at the beginning. One method would’ve been quite enough to confuse both of us this first time out.
See Joe look like a circus clown.
Clumsy and awkward do not adequately describe the moment. I had Cash’s lead rope in one hand and a three-foot-long Handy Stick in the other. A Handy Stick is a plastic rod used to extend the length of one’s arm so that, hopefully, one can stand back far enough to avoid the kind of knockdown Kathleen got to experience. The stick, sold of course by one of the DVD trainers, is not to be used for discipline, only for guidance. According to this particular DVD, I was supposed to be doing one thing with the lead rope and another with the stick.
It was like trying to rub circles on your belly with one hand while patting your head with the other.
I felt like an idiot.
Those droll cocks of the head and quizzical looks from Cash were coming at me like machine-gun fire. I expected him to burst out laughing any minute. I was clearly not getting through.
But I didn’t give up. What I ultimately did was push aside most of what the DVD was telling me to do and started making it up as I went. Trying different things. If this didn’t work, I’d try that. Or something else. And slowly, over time, I began to see that it really doesn’t matter what you do, but rather how well you communicate what you’d like for your horse to do. If touching his ear will communicate that you want him to roll over, so be it. Ultimately I reached a point where I can now ask Cash to back up with nothing more than a word, or a toss of the head, or a flick of a finger

And it all came about stumbling around through the process of trial and error. Which lead me to look at communication from his end of the lead rope, not from mine. What could I possibly do to get him to understand what I’m saying, what I’m asking?

The time came pretty quickly to get off the DVDs altogether, to get out of the books, away from the clinics, and spend that time with the horses. To let the horses be our teachers. To watch them interact with each other and begin to internalize what they were doing so that it became a part of our vocabulary, part of our being. To understand their individual personalities because I knew them, not because I consulted a book or a DVD or a spin chart. It was No Agenda Time and lots of it. Time spent with without a goal of accomplishing a thing other than being with the horses, getting to seriously know them. And then trying different things based upon what we learned.

The longer I’m with horses the more I realize that every good decision comes from gathering knowledge, spending lots of time with the horses – which not only develops bond but wisdom – and then exercising my best judgement… knowing that it might change tomorrow when I see how it works or learn something new. So… please… don’t look for answers (except from your horses). Look for knowledge. Enough of it so that you can see through the things that make no sense and therefore make good judgements… knowing that it’s all trial and error. Also know that if something doesn’t seem logical, it probably isn’t. If it doesn’t make sense, it’s probably not right. And if it’s only for convenience the odds are good it’s the wrong answer for the horse.

And please don’t ever be the person who actually said to me, “Just tell me what to do… not how to learn.”

I’m often asked to describe our “method”… but we don’t have a method. Because every horse and every situation and every relationship is different. When I go down to feed, twice a day, each time I’m faced with different issues depending upon who is where. Each horse is fed in a specific place that has been determined by their dominance position in the herd and how fast they eat… but sorting them into those places is always different. I sometimes catch myself wishing that they would all just disperse and go automatically to where they know their feed tubs are because sometimes it’s like fruit-basket turnover. But I always get something out of the sorting process because the challenge is always different depending on who is where, their moods, the weather, and whatever else is going on at the time. In the beginning it was always trial and error, but not anymore… usually… because the time I’ve spent with them has taught me that I can make pretty good decisions, most of the time, about how I’m going to approach the process, and why.

Our passion at the moment is trying to convince you that once the basics are in place, you don’t need “methods”, clinicians, and other people’s directives. There is no such thing as a switch you can throw and each horse will do or be whatever you’d like. It’s continuous evaluation and response.

And always know this: The answer to every question is buried somewhere in the answer to this question: What would my horse be doing for himself if he were living in the wild of the American west where he evolved for millions and millions of years. That covers lifestyle, diet, feet, health, stress, training and to some degree relationships and bonding. And once you have gathered knowledge from the horse (and know how to Google) you will have the ability to deal with it all, to trust yourself to trust the judgments you will make, knowing that some will work better than others but they will all be learning experiences.

There’s always concern, and fear… but please, please, please don’t be afraid to make mistakes. Trial and error is what it’s all about. Nobody, even Pat Parelli, is perfect. Mistakes are learning tools. I made a big mistake the day I put a lead rope on Saffy (see on the website: What a Special Lady – This Wild Mustang). But I learned quickly.